Good burgers, good beers, and a fun carnival atmosphere were a win all the way around. The highlights were: The best burger in Atlanta, The Sublime Donut Burger paired with the Clown Shoes Imperial Stout (and one Porter) flight = best.meal.ever. It also didn’t hurt that there were fire wielders, circus acts, and acrobats on hand.

After 5 years and dozens of beer festivals, Atlanta Winter Beer Fest sold out! It was filled to the brim, to the max, no vacancy, packed like sardines, no dogs allowed (or birds)! Alright, that last one was taken from one of my favorite Snoopy movies, but you get the drift. What was amazing was that it didn’t feel cramped with several areas to hang out including the local tent, swag and food tents, outside, and then the three Masquerade inside areas. I think the only place I felt like I couldn’t breathe was in Hell and that’s another story for another time. Wink. Let’s dive in.

More and more festivals are in Atlanta are integrating the blooming, ballooning local brewery scene, and I love it. One of the newer breweries that is contracting out of North Carolina but coming soon to Chamblee/Brookhaven near you, is Pontoon. They have a Tiffany Blue color that reminds me of the lake on a calm Sunday. Beyond that, John has an affinity for their Pilsner, which is called No Pants Pilsner. It’s a little hoppy for me but he always gets it at a local bar. Another one we’ve seen for a while now at several beer festivals but without product is Southern Sky. I love their slogan, “a little bit out there.” Being in advertising by day, I find it snarky and fun. Along with their slogan, they are going to go against the grain and permanently offer a porter that they claim can also be categorized as a stout. I can’t wait to try it because with chocolate and coffee notes; it could be right up my alley. Finally, they are going to open their brewery and tap room right around the corner from my office in Kennesaw. Happy Hour, anyone?

It wouldn’t be an Adventures in Atlanta beer festival blog without my proclaimed best beer of the festival. This one was tough because believe it or not, I’ve tried about everything out there that was offered! That being said, drum roll please. The best beer of the festival:  Mac Daddy Porter from Monday Night Brewing!  Confetti falls. A band plays. A trophy exchanges hands. What I like about Mac Daddy Porter is its smooth and light but has big, bold coffee taste with a little bit of earth and chocolate. It’s right up there with Drafty Kilt and I love Drafty Kilt.  Other local brews we found interesting to name a few were Second Self’s Thai Wheat, Jekyll’s Stout, and Eventide’s Nitro Stout. Yum.

Atlanta Winter Beer Festival also offered more food and samples this year than in year’s past. It was a good thing that Knotty Pretzels was around, not only to fill some tipsy stomachs, but to save one of our friends from Savage Jerky’s Ghost Pepper Buffalo Jerky. It was tasty, just a little spicy (ok, a lot spicy). I wouldn’t even think of trying it! Ghost Pepper? I don’t think so! Not only was the food abundant, but so was the entertainment. The two that stood out to us were the duo that dressed as Captain America and Batman and Kara Claudy. The comedy-singing duo gave away swag for correct trivia answers and even sang a song or two including Karma Police from Radiohead. I think they may have been Dad’s Garage, but I’m not sure.  Kara Claudy got a tip from us because she had a great range that included favorites No Rain by Blind Melon and Comfortably Numb by Pink Floyd.

After a cold day, everyone went home happy with beer in their bellies and a good time in their memories. I bet you’re all ready for your next festival? Hogs and Hops is coming up in April, and don’t miss Atlanta Beer Fest’s newest venture: Atlanta Wine Party in March.

END_OF_DOCUMENT_TOKEN_TO_BE_REPLACED

There is a lot that can be said about the holidays: a time for family, spreading holiday cheer, celebrating Christ, decking the halls, walking in a winter wonderland, looking for Rudolf’s red nose in the night sky, or sitting on Santa’s knee. If you could talk to Santa this year, what would you ask for? A good concert would be high on my list and one this intimate at the top. So, this year, on a mild December night, situated between Moreland and Piedmont at Smith’s Olde Bar, Rock 105.7 played Santa by treating its loyal listeners and friends to an intimate evening with Gavin Rossdale of Bush. It was a perfect Christmas present for any avid Bush fan. Thanks, Rock 105.7 and sponsor Heineken, you rock!

Onto the concert experience, opening Rock 105.7’s 404 Christmas was Twin Atlantic from Scotland. They just released their third album, Great Divide, and will be touring soon. Melodious with loud guitar riffs, this alternative rock band spent a few songs acoustically with us but was impressed with the American way of spending the holidays. They said people in Scotland should enjoy the holidays like us! Cheers! Once they made way for Bush, the ladies started swooning and out came the smartphones for frantic picture and video taking to forever remember the night.

Starting with “Everything Zen,” accompanied by “Comedown”, “Glycerine,” and a handful of other Bush greats, Rossdale strummed and crooned his way through the night with heart and soul. He was humble and grateful for the loud sing-a-long like atmosphere encouraging the audience to interact with him. Even though billed as Bush, it really became The Gavin Rossdale Show with all the focus on his voice and performance. Chris Traynor, Bush guitarist was also on hand to accompany Rossdale. I’d like to note there’s something to be said about a performer that can take grunge rock songs and turn them into guitar solos and perform them almost totally acoustic.

Beyond Bush classics, Rossdale treated the intimate gathering of Bush fanatics a special holiday treat: two covers that will probably never happen again, so it truly was a once in a lifetime performance. The first was “Wish You Were Here” by Pink Floyd which got the audience singing. Again. After ending with Comedown and taking a bow, Rossdale came back out for his encore, Fleetwood Mac’s “Landslide.” He stayed true to the Mac version of “Landslide” and it was mesmerizing and beautiful to behold.

And with that, to all a good night. 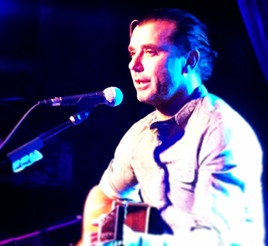 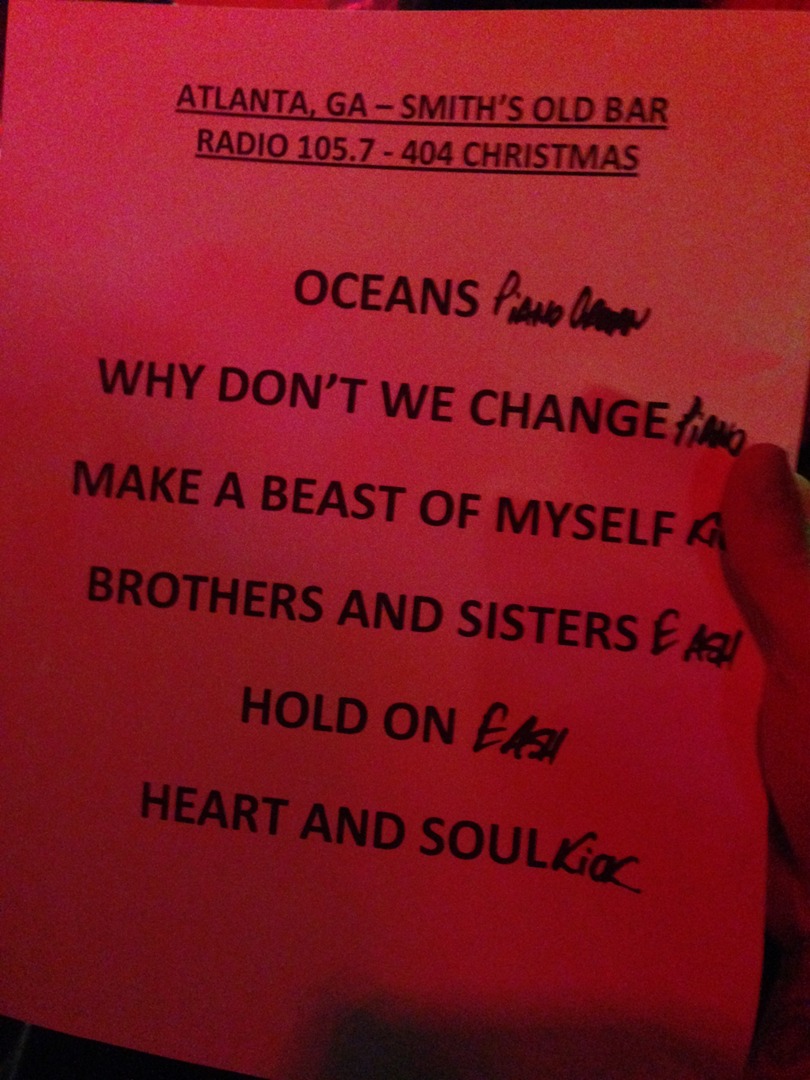 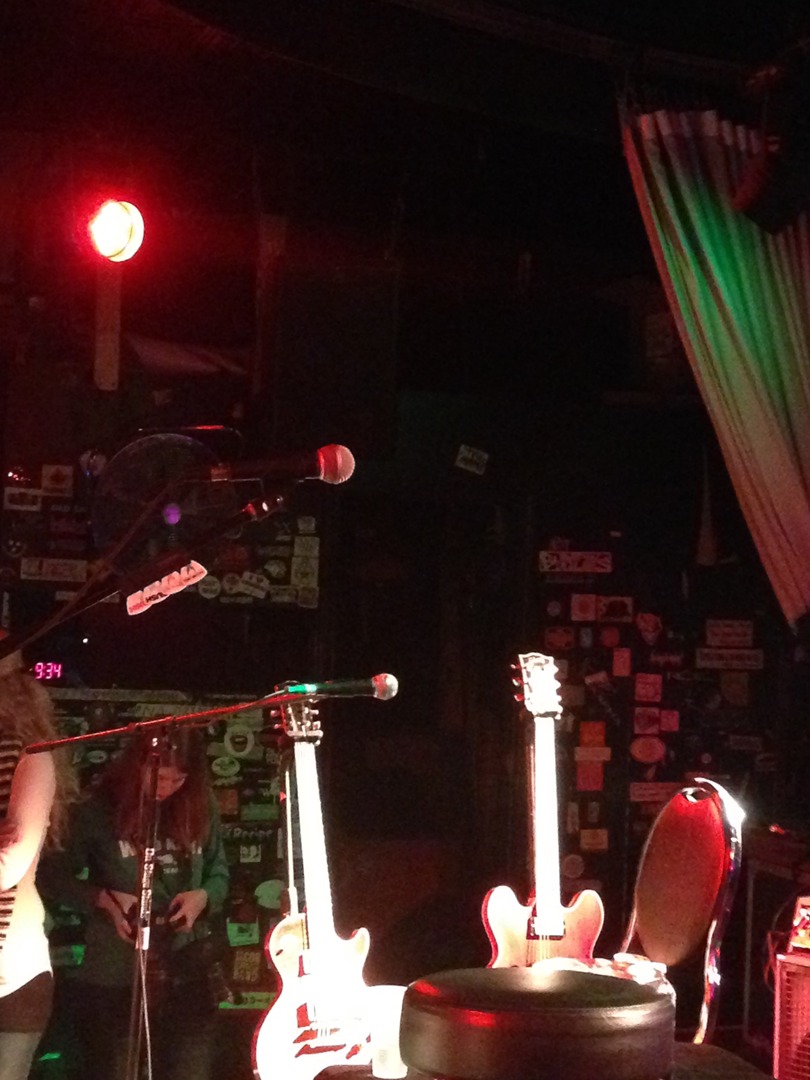 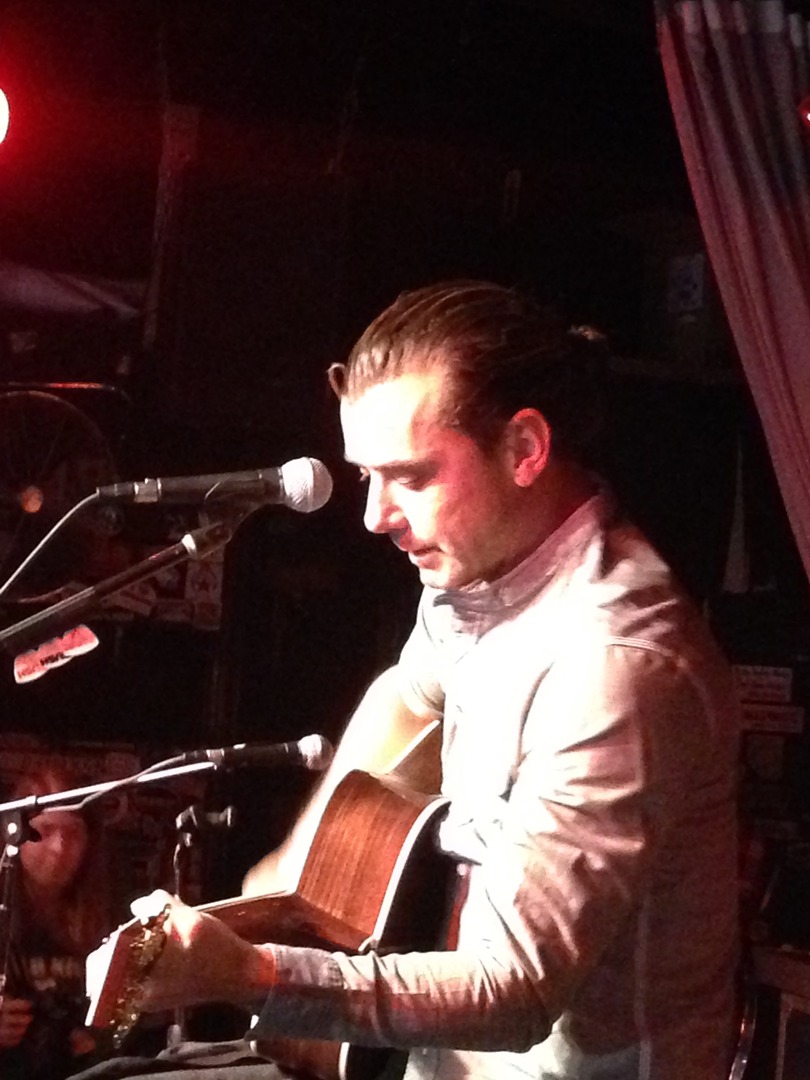 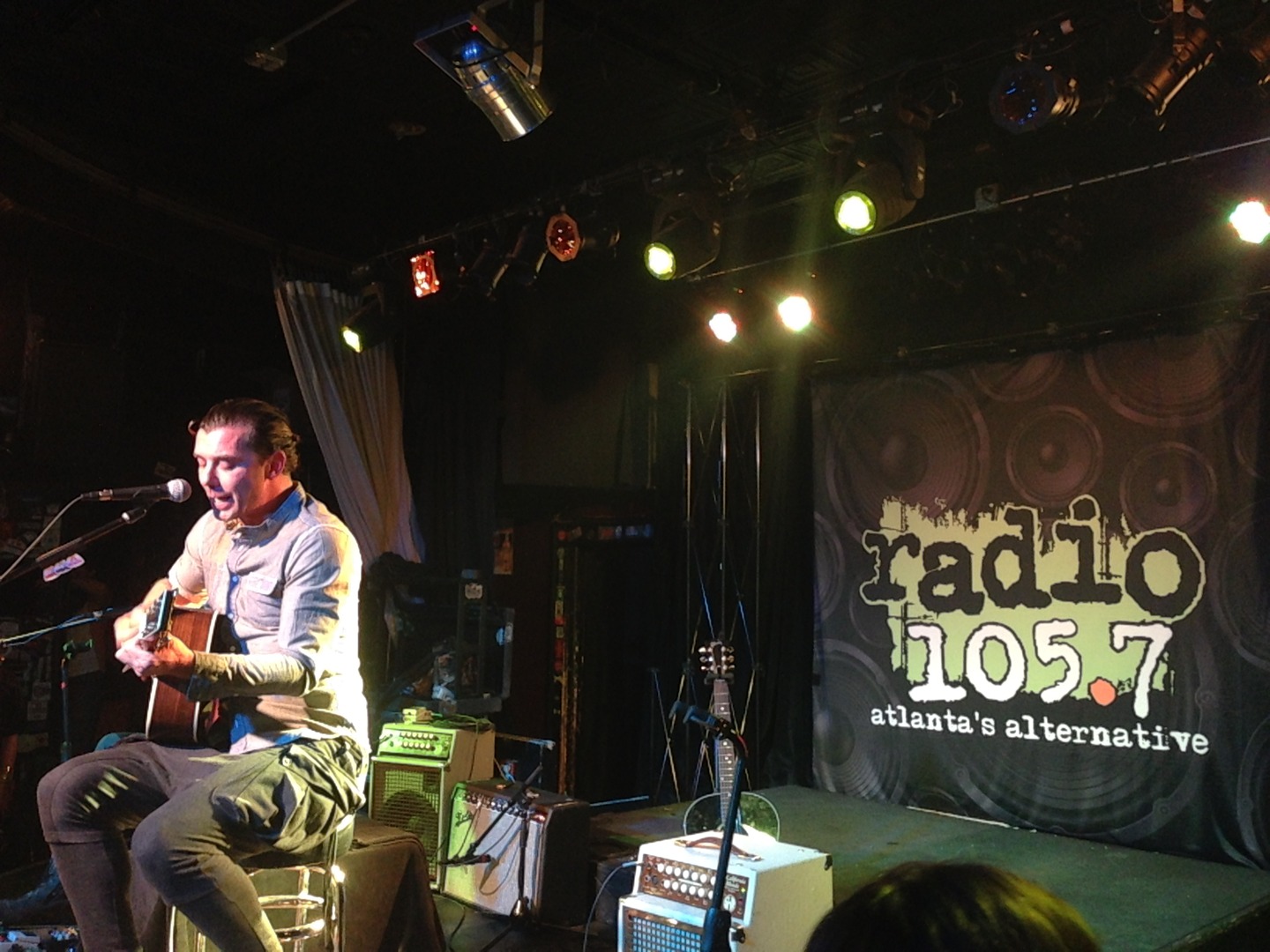 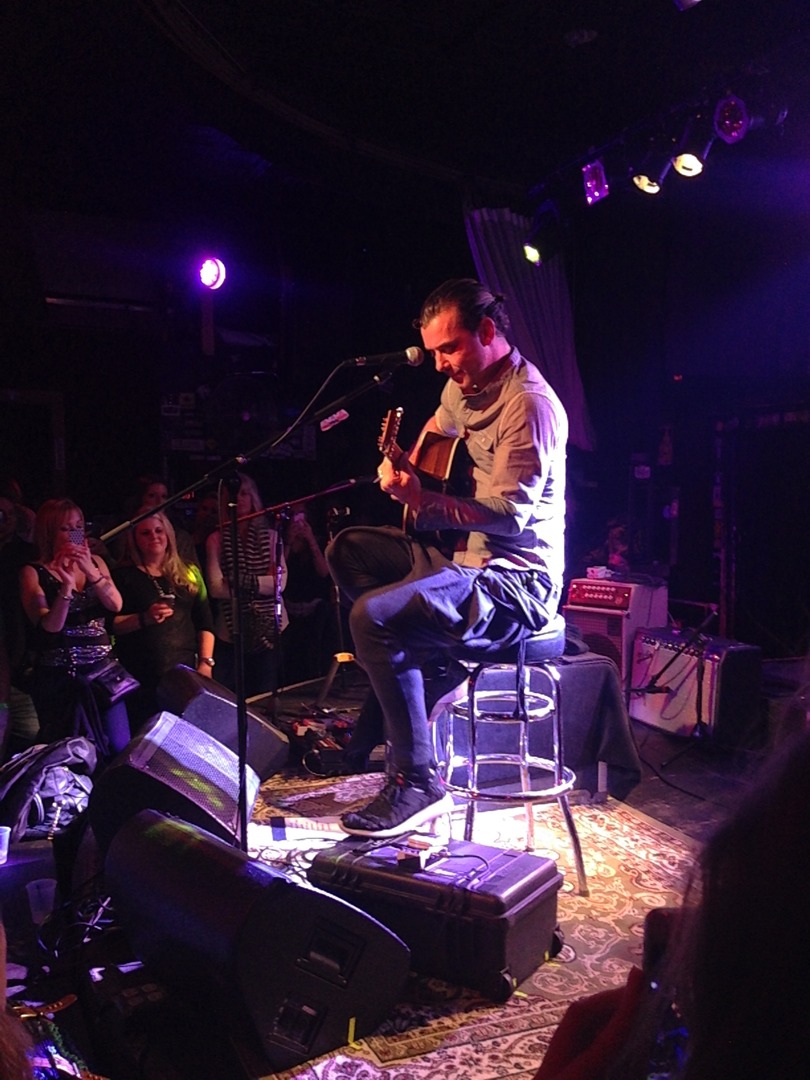 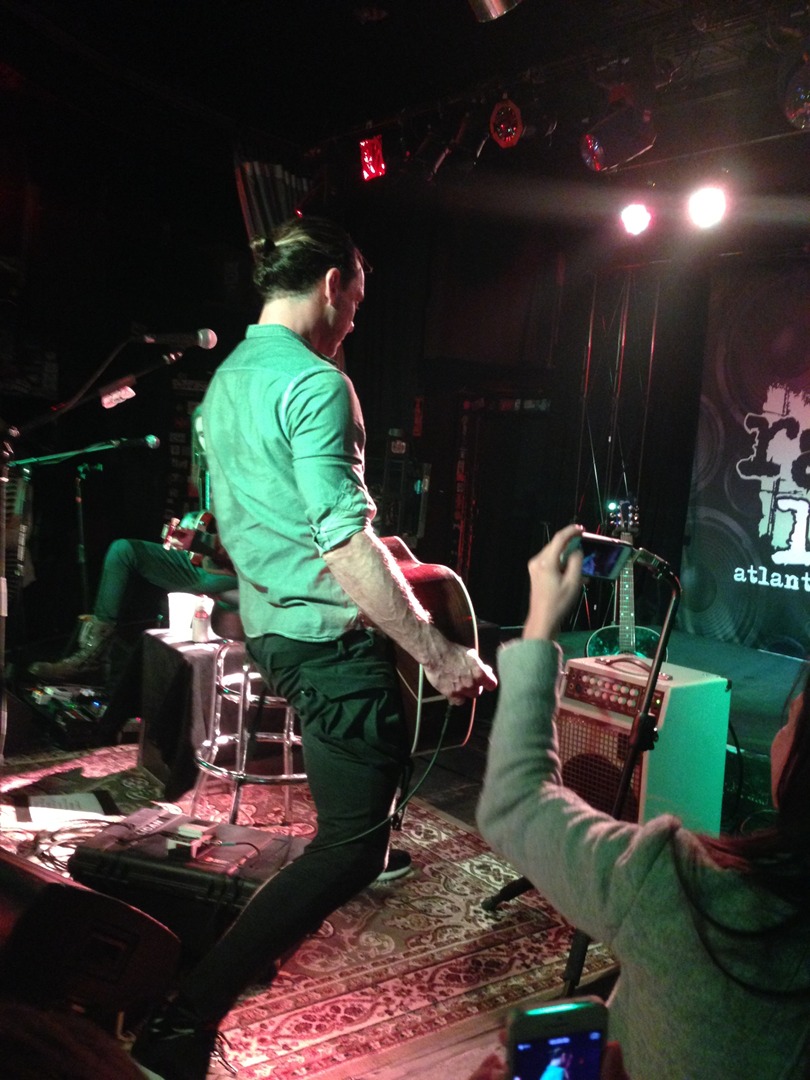 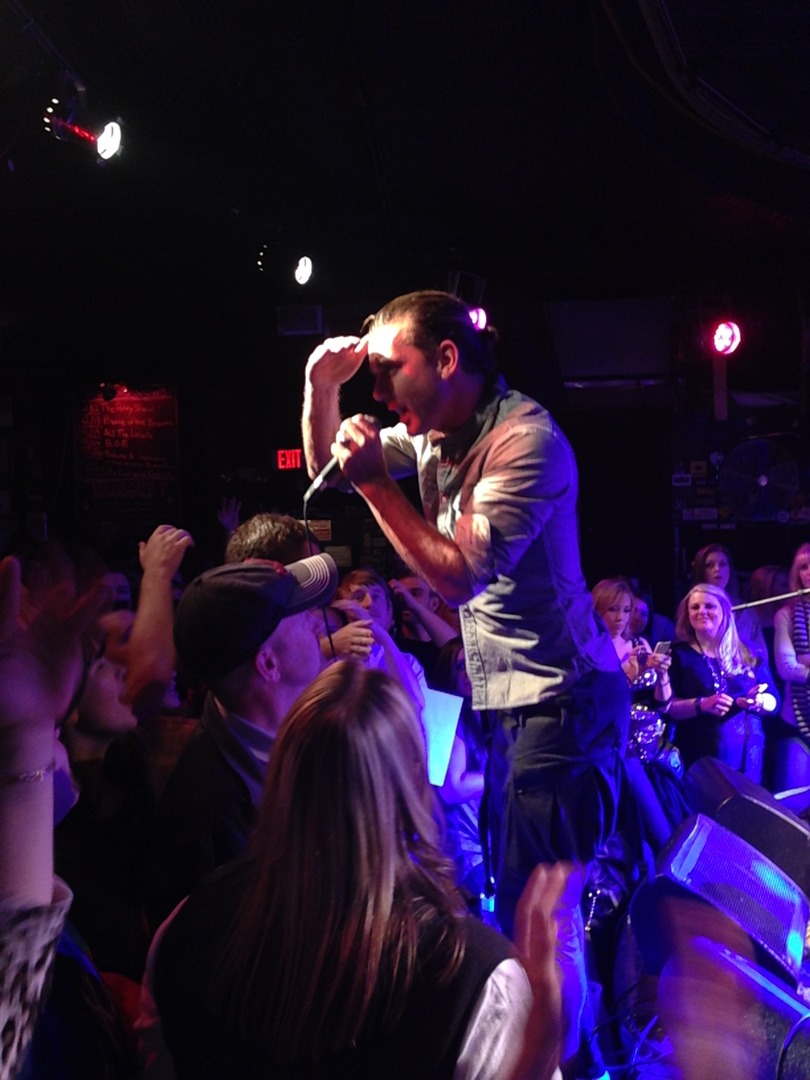 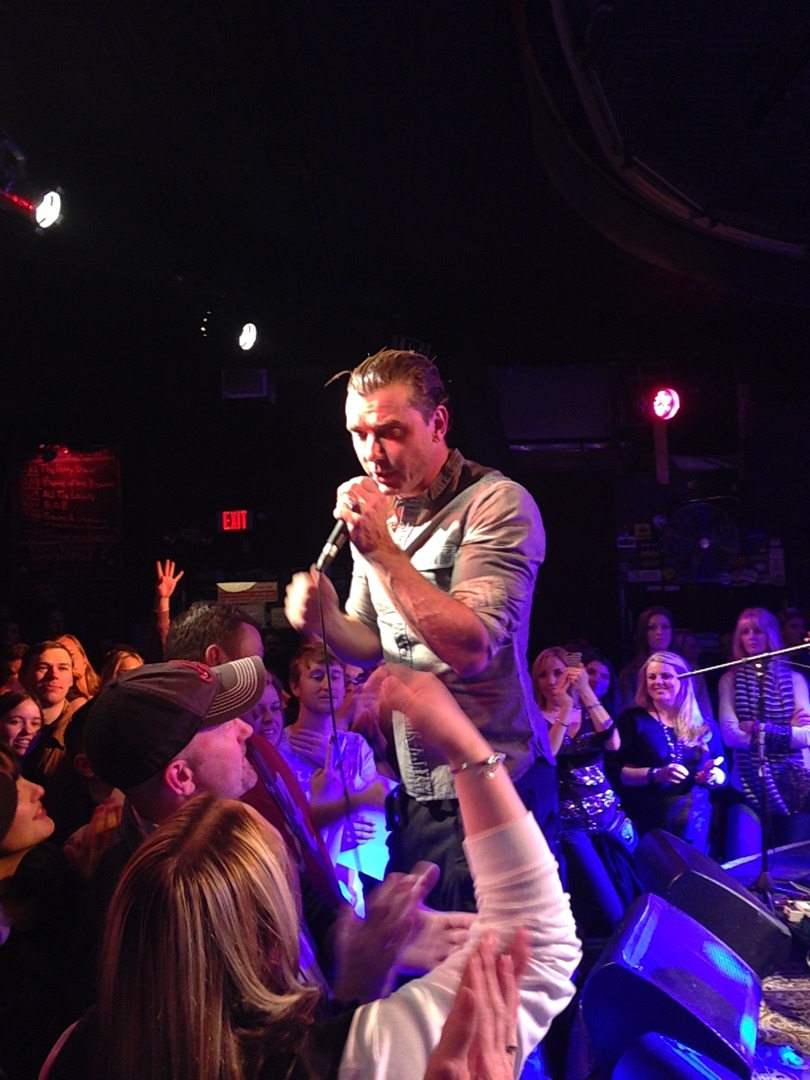 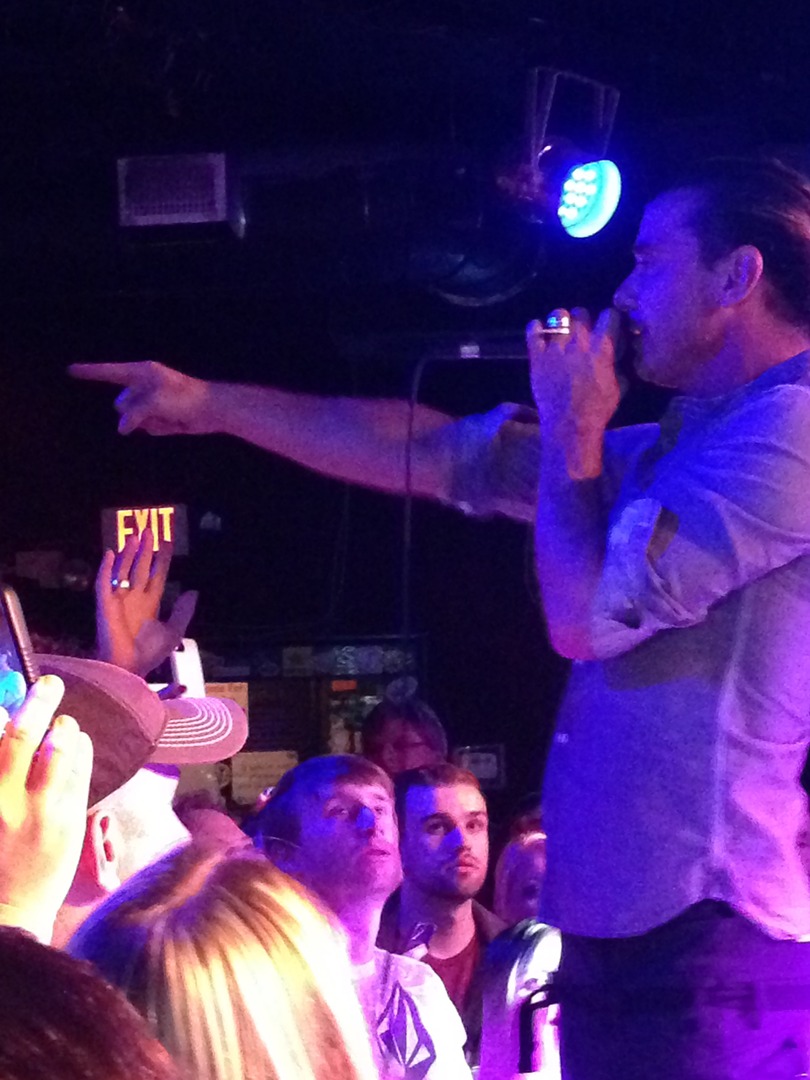 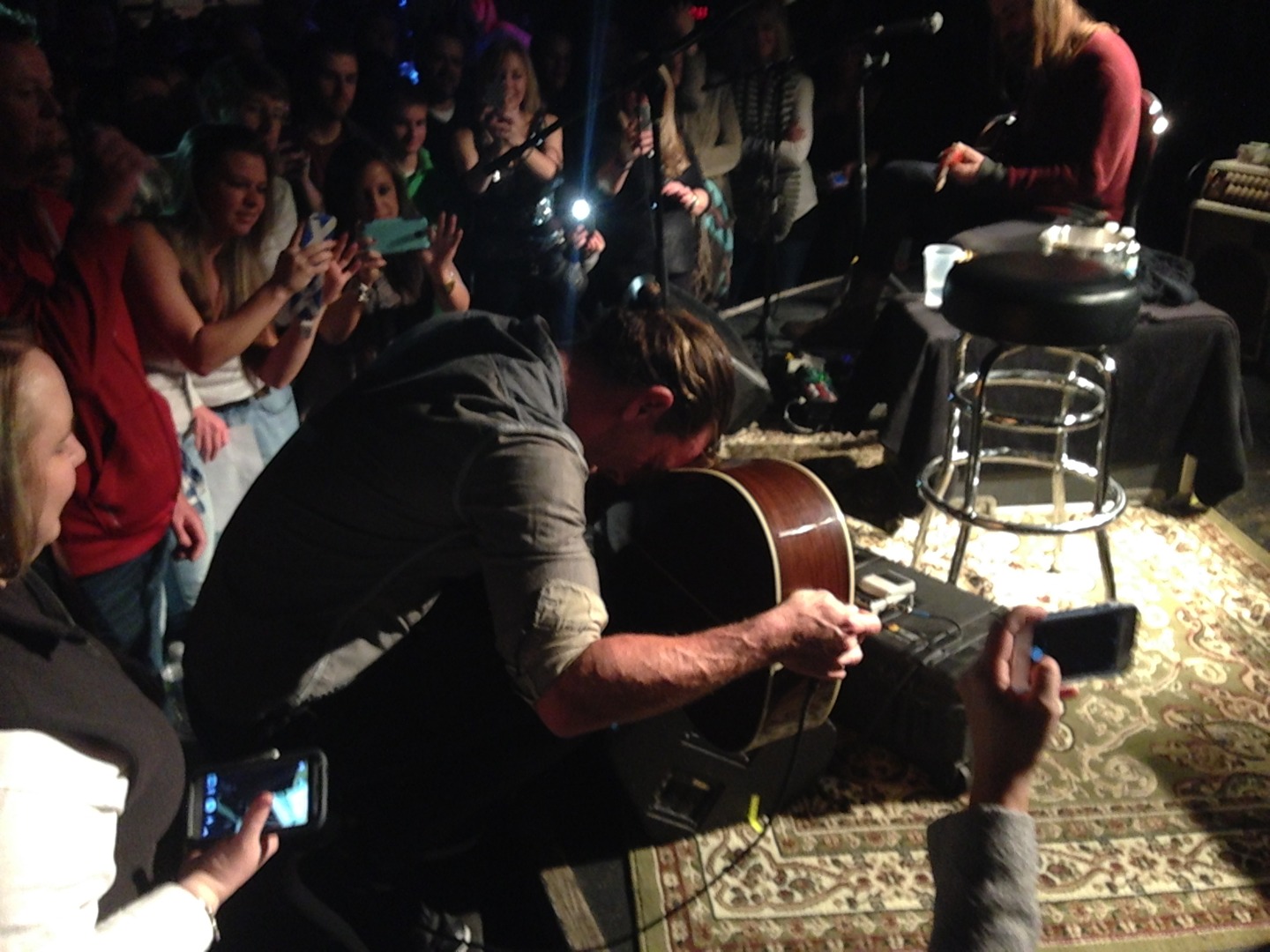 Out in the woods of North Carolina, Wayne Nix of Discovery’s Moonshiners show is hauling moonshine to his clients in an old pick-up truck with some clear bottled liquid in the back, rocking to and fro as the tires hit the cracked, dirt road. That’s kind of what it was like on this fall-like October day, Andrews Entertainment District started a new tradition: Andrews Moonshine Festival, but without the dirt road (yes, there was a pickup truck)! With celebrities and moonshine aficionados in tow, everyone got to rub elbows with distillers and explore the world of ‘Shine.

Speaking of Wayne Nix, he was in the house taking pictures and promoting his own brand of moonshine, Hanging Dog Moonshine. The curious thing is that one of my clients at my day job is Discovery’s off-air and we helped promote the show Moonshiners last year. After talking shop with Mr. Nix, and taking a much needed picture for my office, he explained that Moonshiners is legit and to not lump them in with the other “reality shows” out there. He also came bearing ‘Shine gifts: you could buy a Wayne’s World T-shirt or simply try his ‘Shine. It was pretty good and I know it might not be the ACTUAL ‘Shine from the show, but I can pretend it is! Keep on truckin’ Wayne, you were a pleasure to chat with!

In the same vein as other ‘Shine celebrities was Bill Elliot. When I was young, my parents and close extended family used to travel every July to the Firecracker 400 in Daytona Beach. The adults would go every year to the race, while for us kids, it was the annual beach trip. I’d heard of Nascar greats like Petty and Allison, as well as Bill Elliot every year, as my uncle was a huge fan. Secret: my cousin Allison was named after Bobby Allison. But, I got the pleasure of talking to Billy and told him the above story. He was there as the face for his own brand of moonshine called Dawsonville Moonshine. He had an apple pie moonshine that was a little sweeter but it tasted like apple pie in a glass. Yum.

One thing I didn’t know moonshine could be was inspirational. I talked to Charlie Ball of Troy & Sons Distillery. His wife and he moved to North Carolina to help their sons, whom have a rare metabolic disease. Little did they know that the move would result in a moonshine business that would bloom out of housewarming gifts made by their mother, Troy, for their neighbors. The Today Show covered the story and lovingly call her the Moonshine Mom. Check out their story here:   http://www.today.com/food/mom-honors-her-ailing-sons-moonshine-making-business-2D79607492

Finally, I went into Andrews Moonshine Festival believing that moonshine is a million proof alcohol that you have to drink out of a thimble or risk overdosing on alcohol. I learned something new! Let’s get to my favorite moonshine of the event was Moon Pie Moonshine that has a hint of chocolate with the obvious kick at the end. It was sweet and good on its own but when they added A&W root beer to it and all of a sudden it tastes like a tootsie roll.  Awesome. The other one I was impressed with was American Born Moonshine and their sweet tea flavored beverage that was brewed with a mix of Earl Grey and English Breakfast tea. It literally tasted like tea. They had lemonade added to it in a mixed drink that was also good, but the moonshine itself made the drink!

Thanks, Andrews Moonshine Fest, for setting me straight on moonshine. 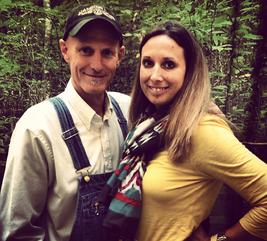 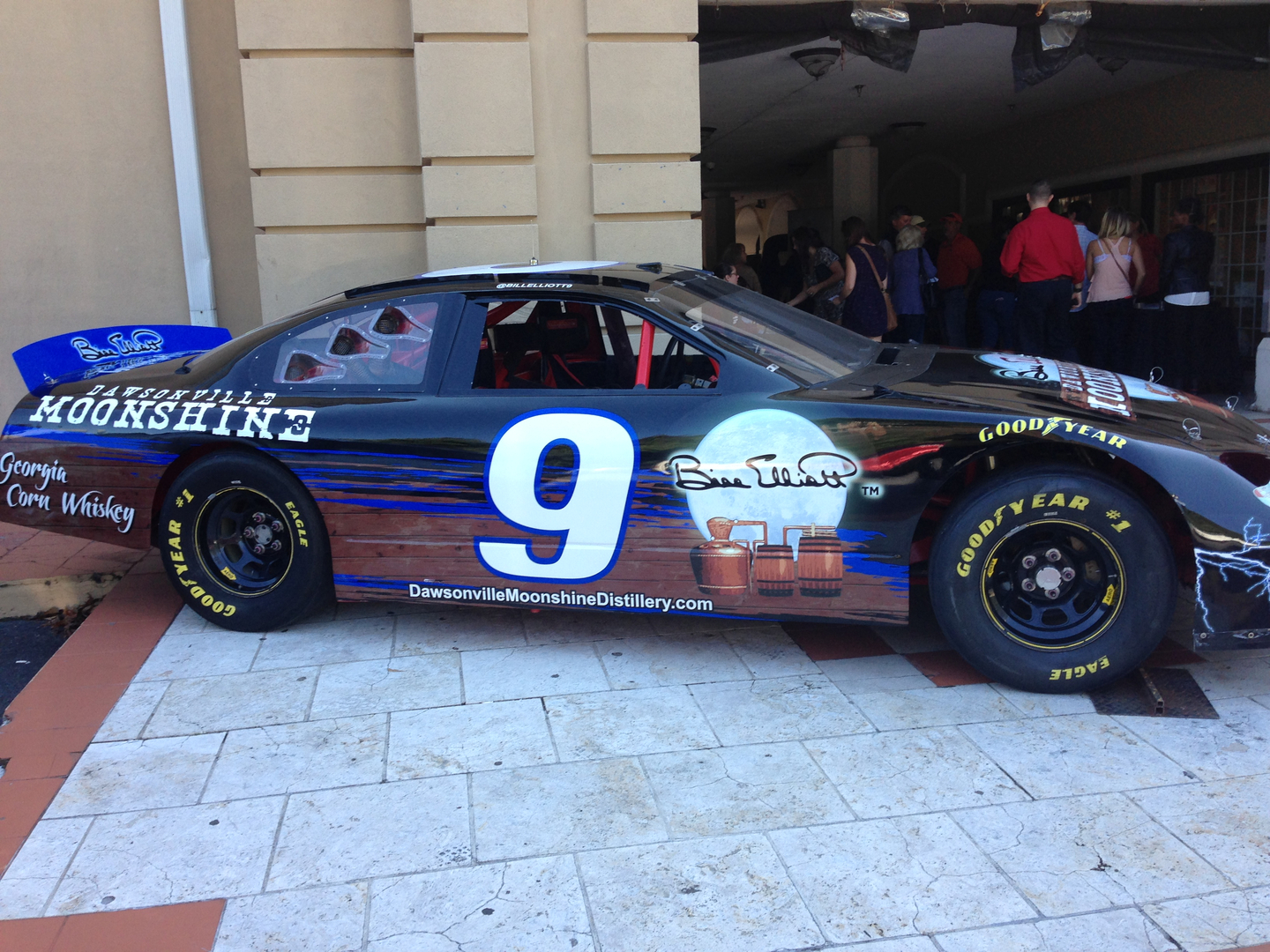 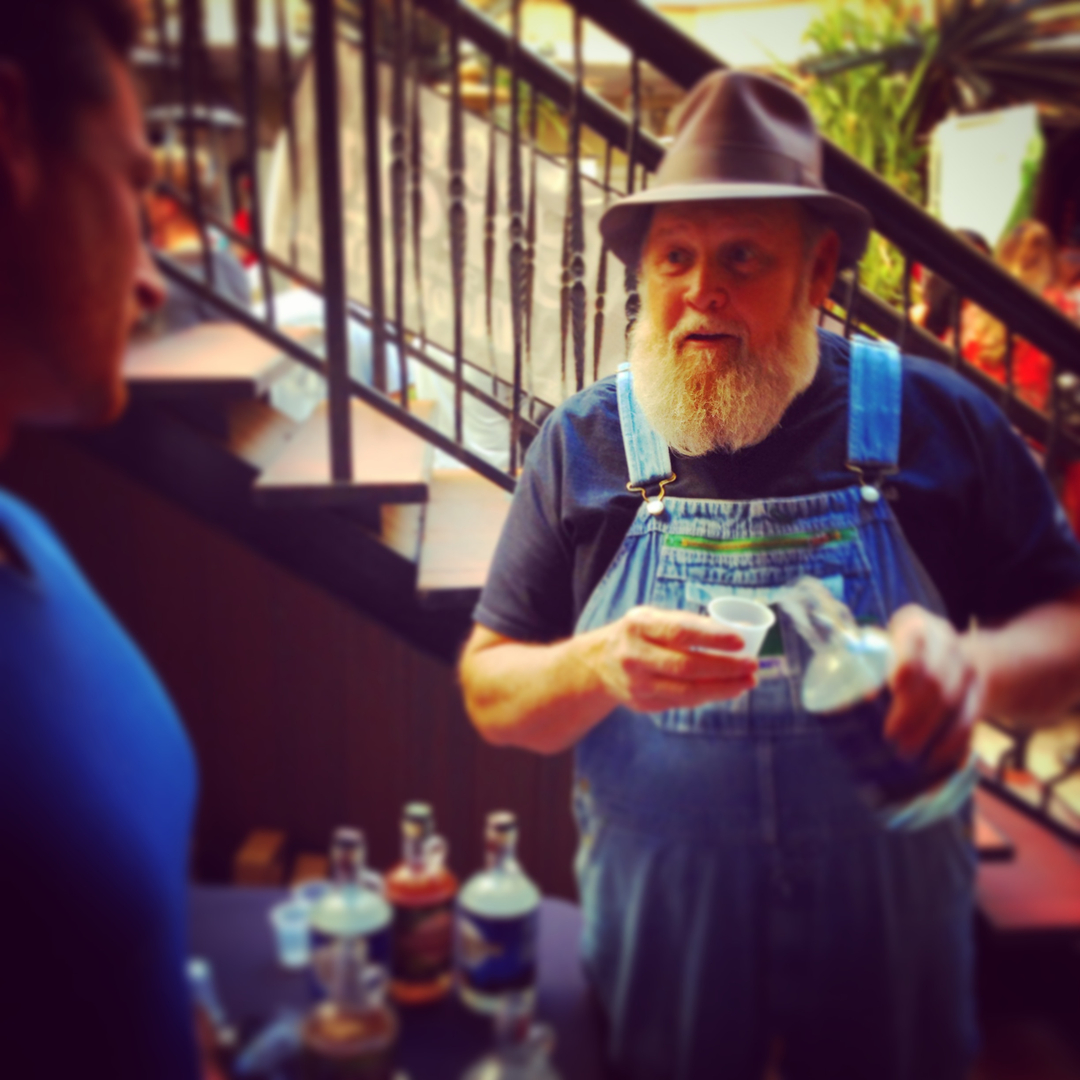 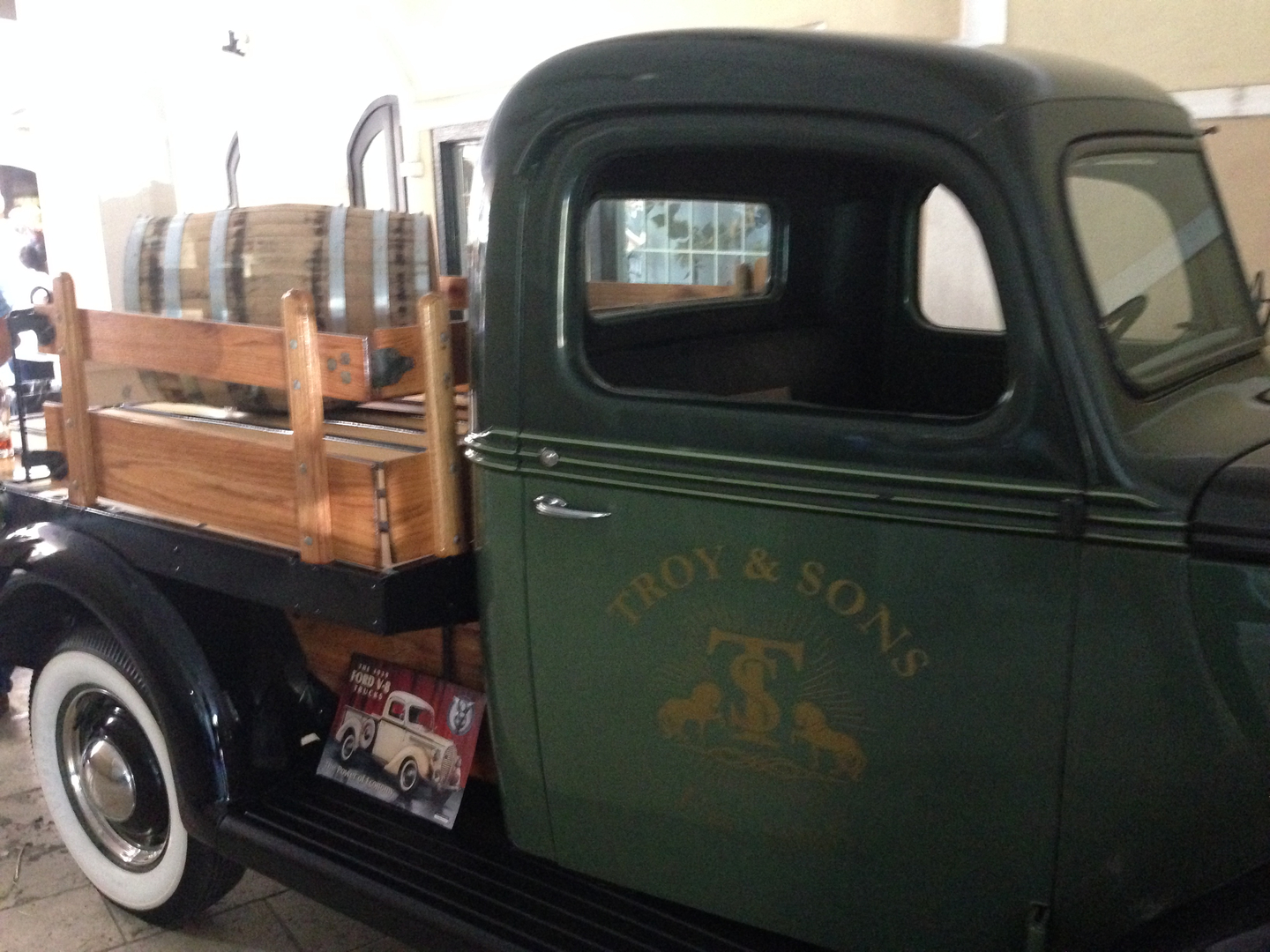 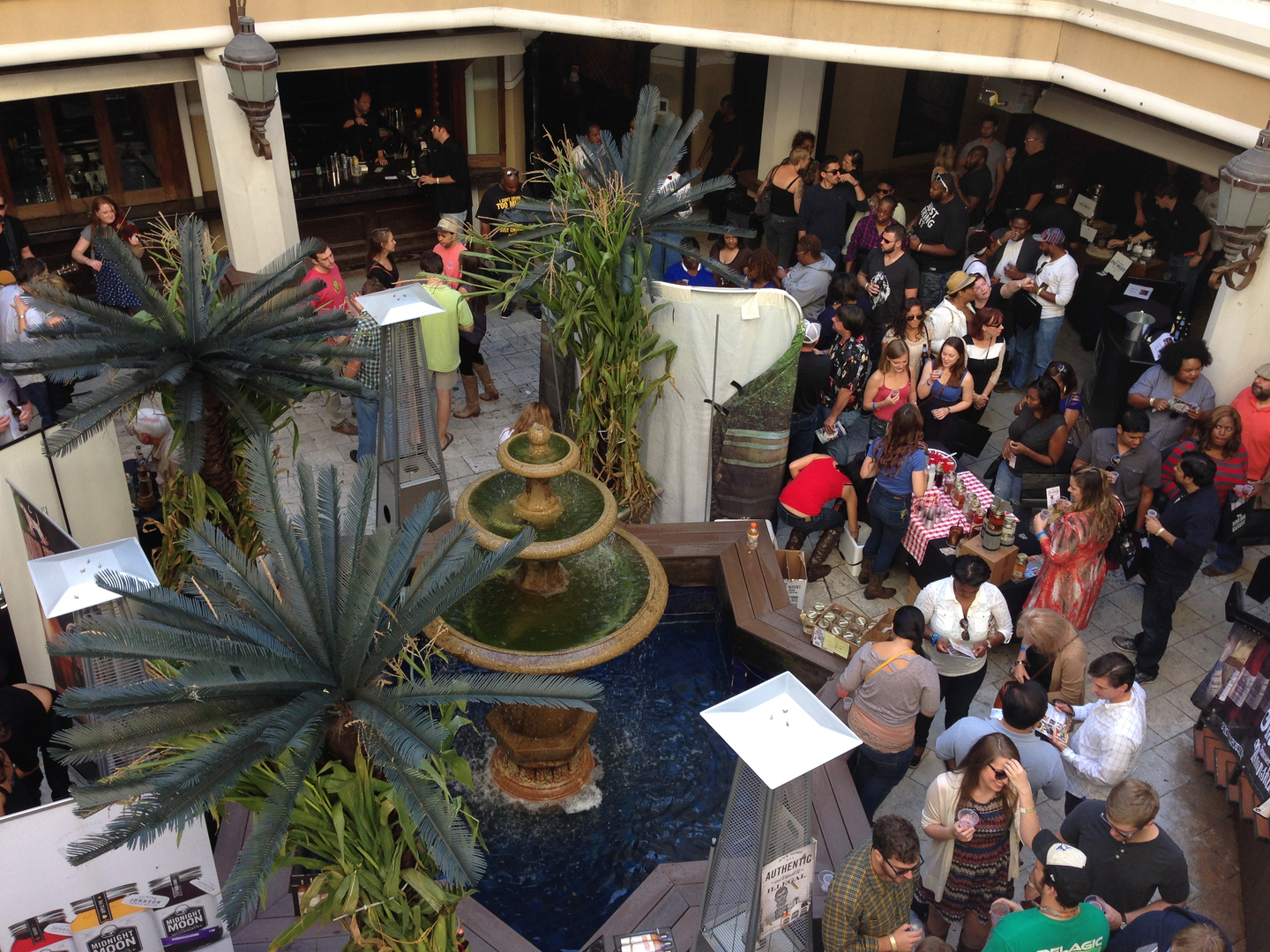 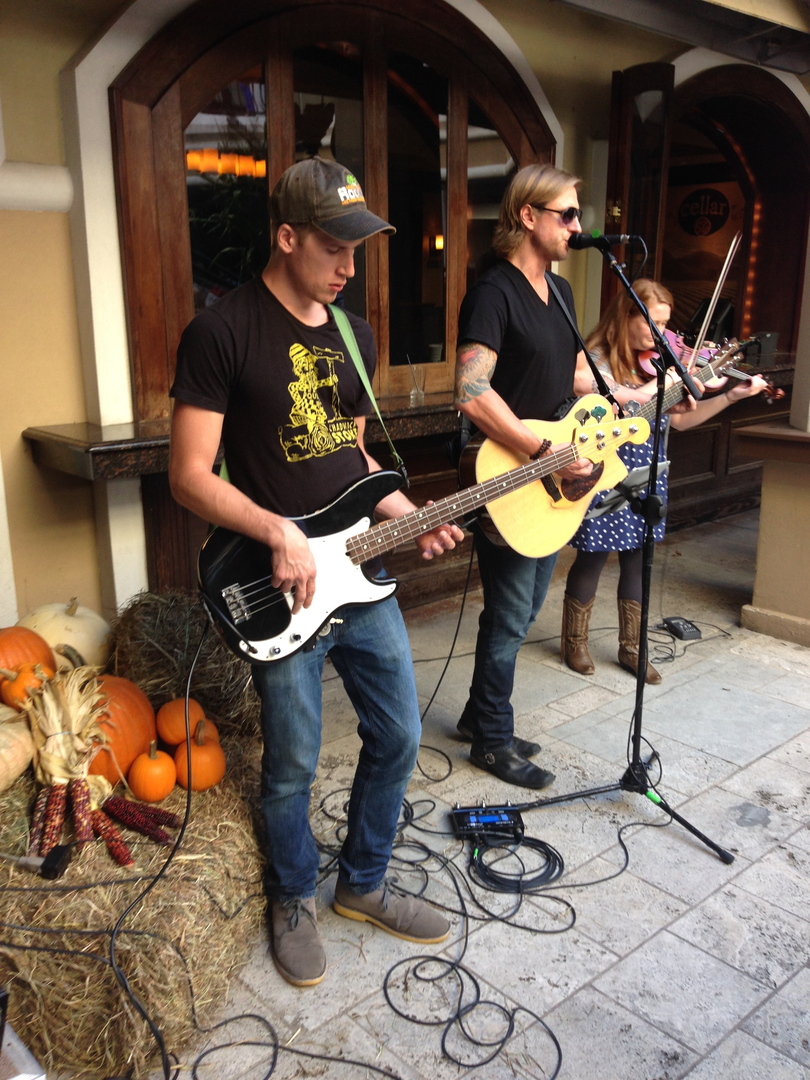 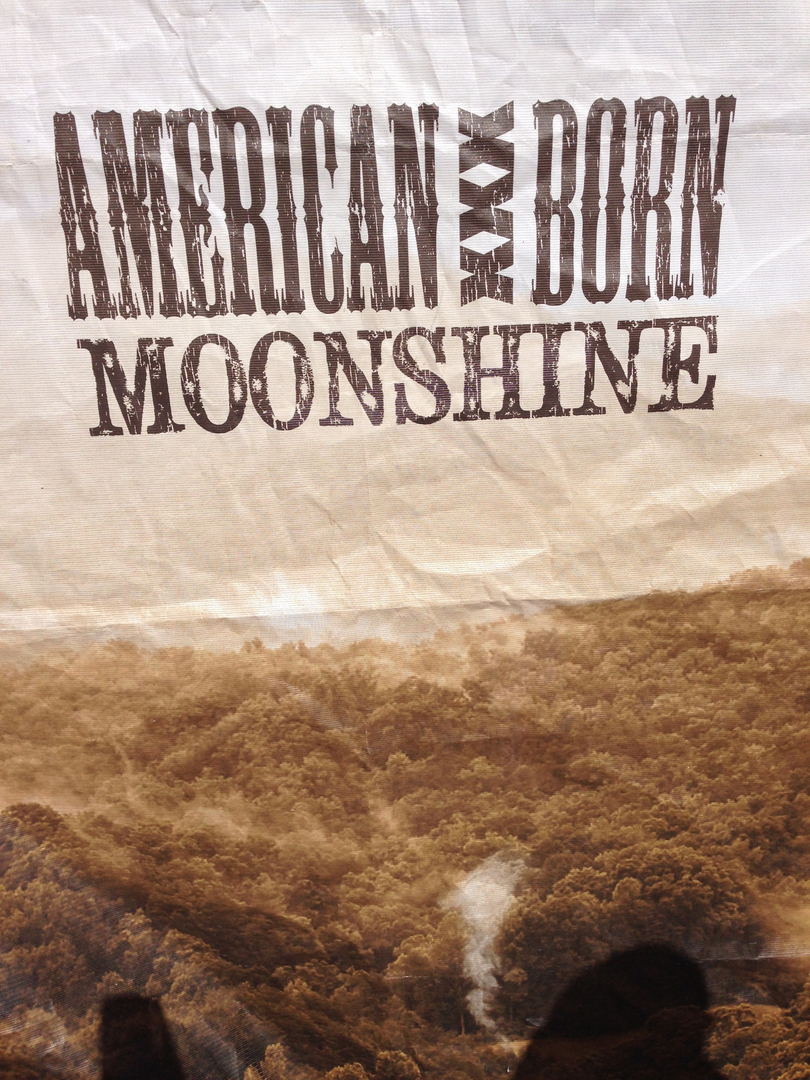 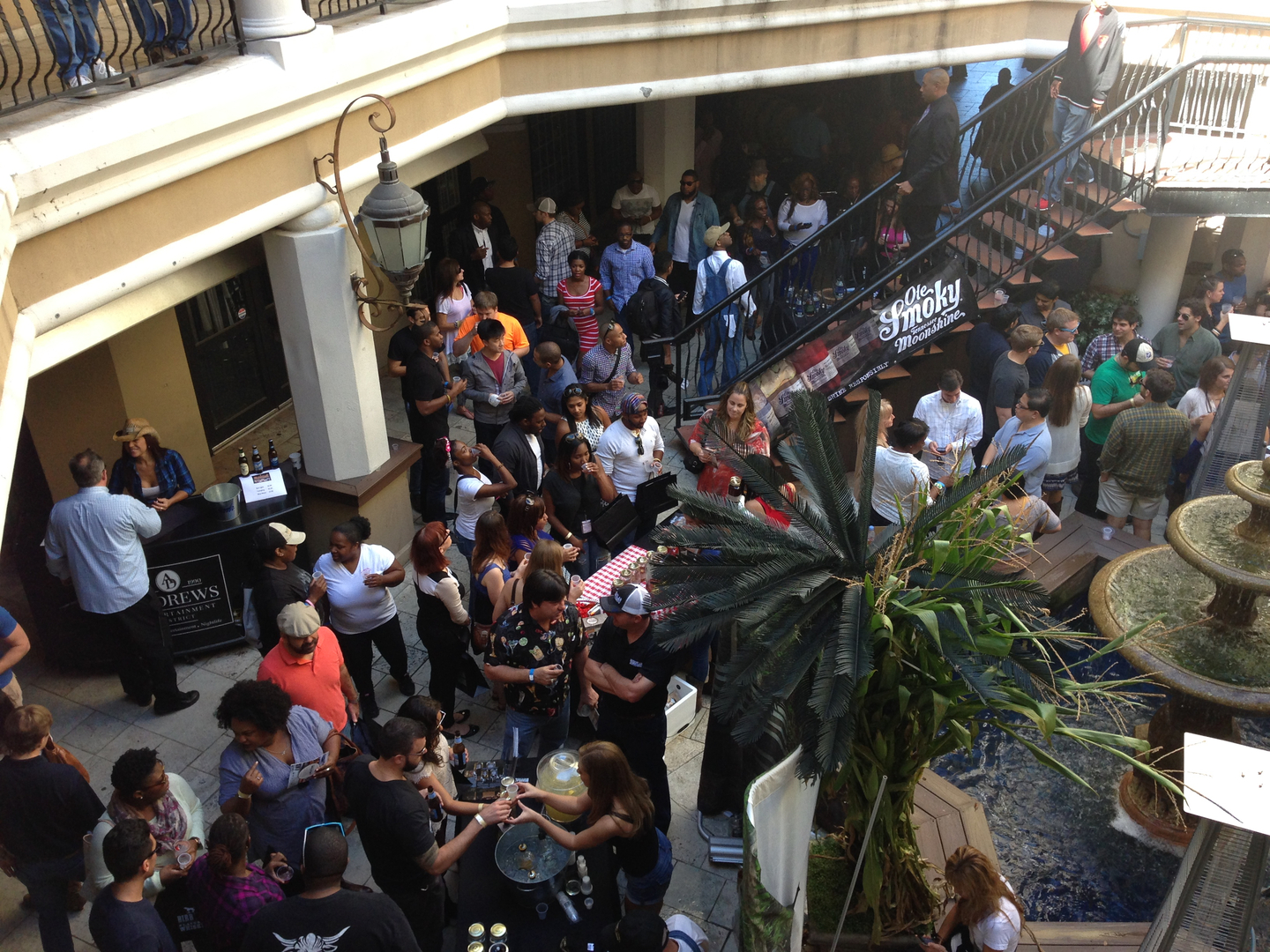 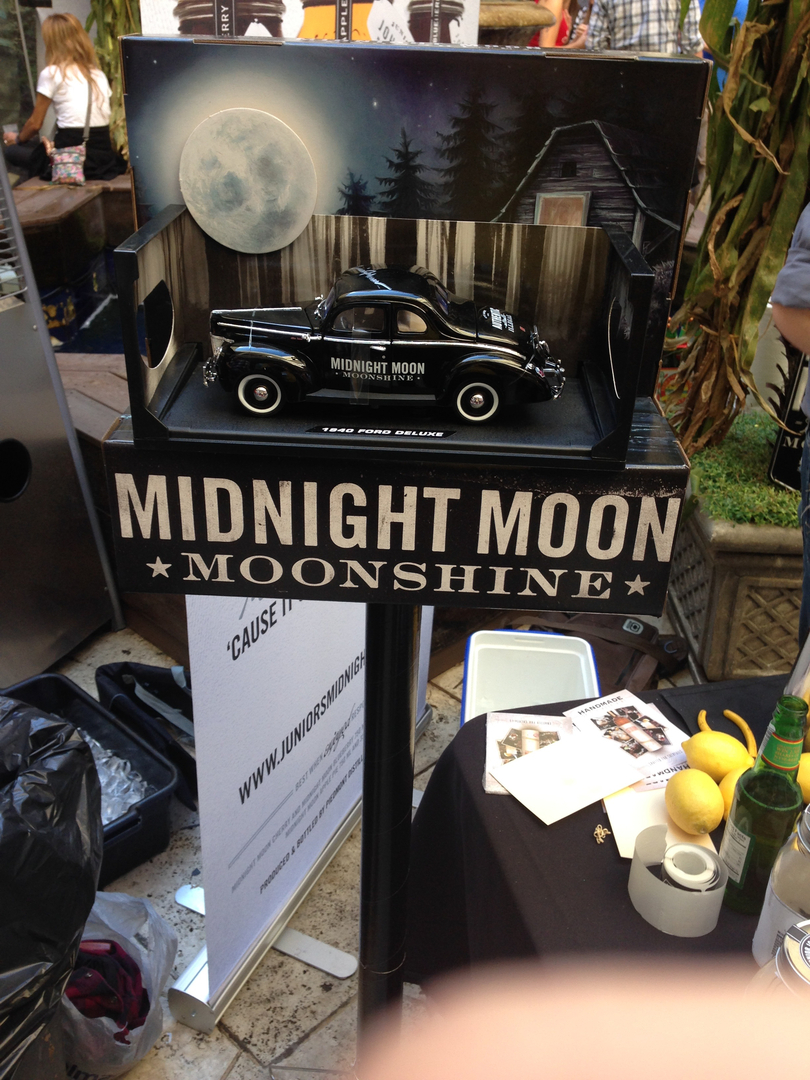 Even though the Braves didn’t win, we met a few people and enjoyed some very good seats. Highlights: The usher trying to start the wave (TRYING) with much hilarity. Weezer playing Buddy Holly into The Sweater Song. Together. The crowd loved it.